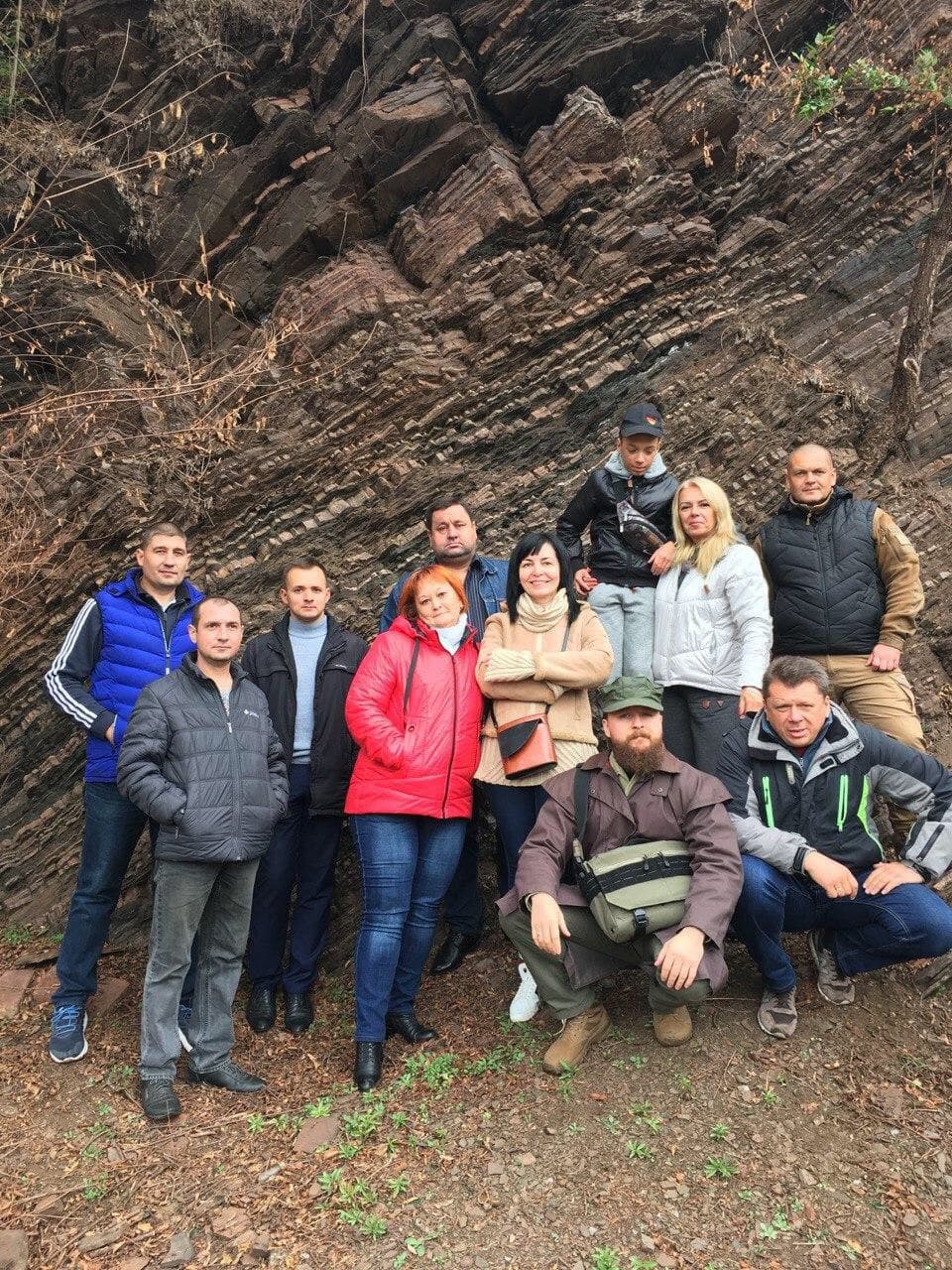 Author of the text: Kylymchuk O., Club of active recreation and entertainment “48 parallel”, member of the Federation of sports tourism of Kryvyi Rih.

Last weekend, the first-of-its-kind tour of the industrial Kryvbas for members of  Bodyguards Federation of  Dnipropetrovsk region took place, at the initiative of its chairman – Oleksandr Bukhanovskyi.

Participants got acquainted with the history of Kryvyi Rih as a settlement and its formation as a large mining and metallurgical center. The key role was given to the richness of minerals in the region, in various manifestations: from natural rock outcrops along rivers and geological expositions in the park, to quarries, dumps and post-man-made landscapes created as a result of their extraction.

The route began in the “heart” of Kryvyi Rih, near the intersection of Svyatomykolaivska Street with Poshtov Avenue, which has long been the famous Kizikirmensky way, which the Cossacks not only used when going to the Crimea. Of course, along the way there were Cossack winter quarters and post offices, one of which, in 1775, became “Kryvyi Rih”, at the confluence of the Ingulets and Saksagan rivers.

Of course, someone had to carry mail, and St. Nicholas Church was built before the founding of the station, but the first official mention of Kryvyi Rih dates back to 1775, but the name itself was associated with the still existing concept of “Kryvyi Rih”. formed at the confluence of two rivers. That’s where we went: once again to admire the beauty of natural and landscape landscapes, only from a historical perspective.

Fedor Mershavtsev Park is picturesquely located along Ingulets and Stara Saksagana, with almost 100 years of history, the famous “business card” of the city – a boat station and, which is also important for the theme of the tour – a geological open-air museum. Here the participants of the tour saw with their own eyes what types of iron ore are mined in the quarries of mining and processing plants (GOK) of Kryvyi Rih.

After a tour of the origins of the city and the components of the richness of its subsoil, we went to the origins of the mining industry – the old industrial areas, where ores began to be mined in the late nineteenth century. In particular, we saw what the first quarries looked like, and even went to the exploration and production gallery, with traces of mining more than 100 years ago. Here are well preserved and natural outcrops of rocks to the surface, combined into a geological monument of nature – “Shale” Rocks.

From the era of pre-revolutionary “iron fever”, we move to the era of Soviet industrialization, where we have already seen the results of iron mining for several decades. Thus, on the slopes of the more than 200-meter quarry TsGZK №2, in the current mode there is a picture of the formation of a sloping heap of oxidized ores, where each bucket of excavator or trailer BelAZ, adds variety to the colors of the slopes, as each portion of ore – specially oxidized , which gives different shades. From the outside, all this looks like a large-scale man-made and at the same time colorful spectacle.

When studying the Kryvbas mines, we should not forget about the non-metallic minerals of the region, a large part of which are occupied by granites. Thus, within Kryvyi Rih, not counting the surroundings, there are two flooded quarries for the extraction of gray granite, which have long since turned into anthropogenic lakes, living by natural order, but created by man. There is still water replenishment, and trees and pioneer shrubs on their slopes are gradually hiding under water. Fish scurries between the flooded vegetation and the rocks, and in the summer, locals, sometimes scuba divers, are willing to swim here, for whom the time of year no longer matters.

It is known that in addition to quarries, Kryvbas is famous for its mines. Getting to a working or, even more so, a used mine is not an easy task, both in the bureaucratic and technical sense. However, nowadays tourists can “from the front row” observe large-scale “projections” of underground workings on the earth’s surface. These are 26 (!) Failure zones, where there are mostly giant-sized failure funnels formed as a result of extinguishing the voids of mining chambers of mine horizons.

The deepest of them is 250 meters, and the longest chain of interconnected dips is exactly one kilometer! This is a Kryvyi Rih exclusive. Many tourists, even from abroad, go to Kryvyi Rih to see just that, but not all city dwellers know about their existence and even more so – the location and ways of approach. It is not surprising, because most of them are located in historic mining areas, which have essentially become an “exclusion zone”.

The finishing point of the route again led us to the origins, only this time – natural: the same rocks that were observed along the river Ingulets by Academician Vasily Fedorovich Zuev, back in 1781… It is noteworthy that 100 years after their discovery Kryvyi Rih ores began to extract other significant figure – Alexander Nikolaevich Field. Since then, the scale of production has become world-famous, and the region itself has changed beyond recognition. And only a few places, like MOPR Rocks, show how everything was here before the beginning…

Here we settled down, with a fire, over the river, summing up the tour, sharing impressions and plans for the future.

This tour showed the tourist potential of our native lands and gave an understanding of the complex historical connection of past events and geological preconditions with the current picture of the natural and urban landscape.

Such tours play an important role not only in learning, discovering, and somewhere nostalgia for the region of residence and work, but also in communication between people who in the rhythm of affairs may not often intersect, and even more so all together. Here they have the opportunity to relax and chat in an informal setting. Also, looking into the future, such corporate tours are not limited to Kryvyi Rih. On the outskirts of the city there are many interesting places where you can arrange both recreation (both relaxation and extreme format) and outings for a day or more…